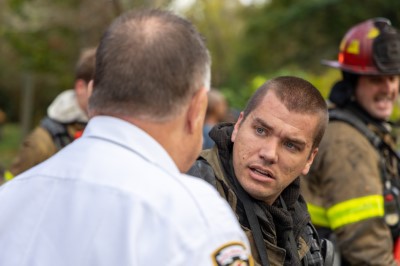 At approximately 8:51 AM, Mobile Fire-Rescue Department crews responded to the 200 block of Rylands Street for reports of a residence on fire in the area. Upon arrival on scene, firefighters on Engine 3 confirmed smoke present at the rear of a single story residence.

Company officers assessed the scene and began to force the front door while crews initiated fire scene operations. Teams of firefighters extended hoselines to the front door in preparation to enter.

After breaching the front door, firefighters discovered heavy smoke conditions and immediately heard screaming coming from inside the residence. Following the sounds of screams, firefighters rushed inside to search for a trapped occupant. Suppression teams entered directly behind the search & rescue crew in order to locate the fire and begin the initial attack.

An approximately 23 year-old, non-verbal, non-ambulatory male resident was discovered in a wheelchair in a bedroom. Firefighters were able to quickly and successfully rescue the occupant from the burning structure without incident.

The patient was immediately transferred to medical teams and evaluated at the scene. He was vitally stable and treated for mild smoke inhalation. No other occupants were discovered in the home.

Suppression teams discovered flames in the kitchen and continued their attack efforts. After approximately 17 minutes of consistent work, all signs of fire were successfully extinguished.

The cause of the fire and damage estimates remain under investigation.