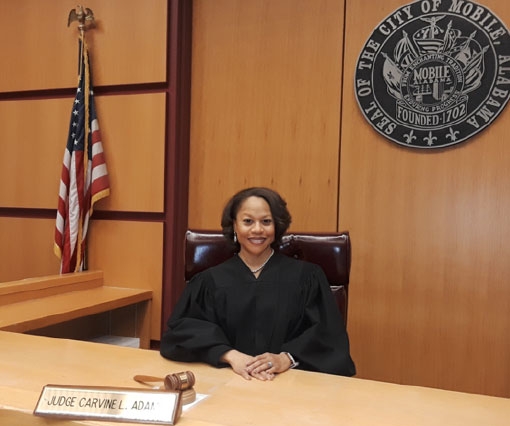 Judge Adams was raised in Prichard, Alabama and is a current resident of the City of Mobile.  A graduate of McGill-Toolen Catholic High School, she earned a Bachelor of Arts in English with a Minor in History from Stillman College in 1993.  Judge Adams received her Juris Doctor from Miles Law School in 1996.

Her legal career began as Judicial Law Clerk to the late Honorable Robert G. Kendall, and Judge James C. Wood of the Thirteenth Judicial Circuit.  She went on to join the Atchison Firm, P.C. as Associate Attorney from 2004 to 2007.  Judge Adams continued her practice of law as Assistant City Attorney for the City of Mobile, City Attorney/Prosecutor for the City of Prichard, and Of Counsel with The Cochran Firm (Mobile Office).

In 2014, Judge Adams was appointed by Mayor William S. Stimpson as Acting Judge for Mobile Municipal Court.  She served in this capacity until her appointment by the Mobile City Council as a full-time Municipal Court Judge in May 2015.

She is married to Patrick D. Adams and they have a daughter, Ryleigh Simonne.